After getting on the plane on Monday afternoon, it all started to become real that I was leaving my friends and family back home in order to start my journey abroad. I slept maybe three to four hours on the plane, I was just too anxious! When we finally landed we each had to collect our bags and figure out how to use the London tube system to get to our hotel. After asking several employees (all extremely nice), we finally found our way out of Heathrow airport and to Paddington station. Our hotel was about a 5 minute walk from Paddington (in the pouring rain, with a 50 pound suitcase, a stuffed backpack, and a carry on that fit as much as I possibly could).

London rained almost the entire time we were there, so I guess we experienced it like true Brits!! The two highlights of London were the London Eye, and the Borough Market. The Borough Market was amazing!

We didn’t really spend enough time in London. We were there for not even 2 full days, so we didn’t get to experience going inside the famous buildings, but we were just happy for the experience. At 8pm on Wednesday night, we were boarding the train for Paris! This was the part of our trip that I was most excited for.

We arrived in Paris around 11pm on Wednesday. We needed to take the metro from the train station to our hotel, and once again we had all of our bags. One thing no one warned me about was that countries in Europe do not really have to accommodate handicap people or have elevators or escalators anywhere. So in Paris, at 11pm, we were confused, trying to figure out the metro, and while we were doing it we had to lug all of our luggage around and up and down countless flights of stairs. It was awful! I highly recommend taking a taxi if you have any sort of luggage with you.

Once we got off the metro at the correct location near our hotel, we walked around aimlessly in an area that was off the beaten path, so there were very few people outside for us to ask for directions. It took us four different times of asking locals where we should go before we finally found the hotel…. and to our surprise, we had passed it at least three times!! The hotel was under renovation so it did not have any big signs or displays marking it.. just a tiny logo on a banner that we must have passed what seemed like a million times!

Paris was my absolute favorite! We did the Louvre, climbed the top of the Arc, saw Notre Dame, the Pantheon, the Pere Lachaise cemetary, sat and had lunch in the Tuileries gardens, and ate all of the baguettes, macaroons, and croissants possible! Of course we also went to the top of the Eiffel Tower! The Tower is completely stunning. 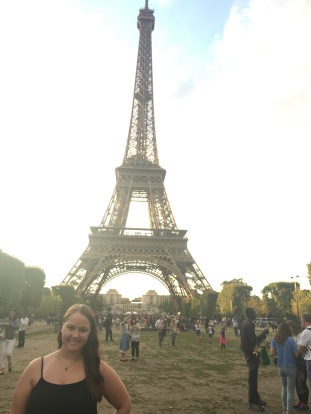 Paris would have been hard to leave if I wasn’t going to Dubrovnik. I loved Paris, but Dubrovnik was going to be the real start of my journey. Boarding the plane and preparing to head to Dubrovnik, I had been so nervous and excited at the same time that I had butterflies and felt nauseous. We had a late flight into Dubrovnik, so when we arrived we could not see the city, or our view from the apartment. There will be more to come on Dubrovnik. So that is how I made it from Rochester, NY, to London, Paris, and now Dubrovnik in just 5 days!!